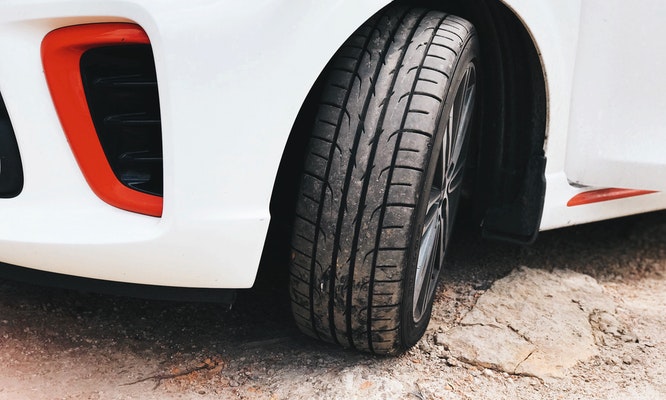 Have you ever noticed green valve-stem caps on new cars’ tires at dealerships? Although the green is a nice touch it is actually to denote that the tires have been filled with nitrogen rather than compressed air. Nitrogen-filled tires provide better fuel-efficiency and don’t lose air as quickly as tires filled with air, according to Consumer Reports.

This 2015 Kia Sedona has tires that are filled with nitrogen. You can tell because the valve-stem caps are green.

According to the Get Nitrogen Institute, there are several reasons why nitrogen-filled tires are the better option:

Nitrogen-filled tires are said to maintain pressure better than tires filled with compressed air. This is because air escapes out of the tire at a faster rate. Nitrogen is less permeable than oxygen because of it’s larger molecule size. “A tire filled with air can lose 1.5 psi a month, [whereas] with nitrogen it can take six months to lose 1.5 psi,” according to the Get Nitrogen Institute.

In a test conducted by Consumer Reports between 2006 and 2007, it was found that “nitrogen does reduce pressure loss over time, but the reduction is only a 1.3 psi difference from air-filled tires. The average loss of air-filled tires was just 3.5 psi from the initial 30 pressure setting. Nitrogen-filled tires lost an average of 2.2 psi from the initial 30 psi setting.” In all, “all tires lost air pressure regardless of the inflation medium, so consumers should check their tires’ air pressure routinely.”

Safercar.gov advises that tire pressure should be checked at least once a month to retain proper readings.

How Should a Tire be Filled with Nitrogen?

If you decide to give nitrogen a try you will need to go to a dealer that has a nitrogen system. Visit the Get Nitrogen Institute site for the dealer locator, or visit Done Right Auto Repair. if you are in the area. These are the steps for filling a tire with nitrogen, according to the Institute:

If nitrogen-filled tires lose pressure and you are unable to have them filled with nitrogen, filling them with air is OK, according to Done Right Auto Repair.

A savings calculator on the Get Nitrogen Institute website estimates that a 2015 Honda CR-V that has tires filled with nitrogen would save an estimated $104.54 a year. This factors in the savings of increased tire life and fuel-reduction costs. This estimate also factors in driving 12,000 miles a year, the cost to replace a tire to be $200, the average price of gas to be $3.50 a gallon, and the CR-V’s 27 MPG*.

With all of this data, it shows that over time tires that are filled with nitrogen hold pressure for a longer period of time and do not need to be refilled as many times as a tire filled with compressed air.

In the end, it looks like tire pressure needs to be checked routinely whether or not your tires are filled with nitrogen or air, according to Consumer Reports. Regardless of the medium, having the correct tire pressure increases fuel efficiency because of a better tire-to-road grip, which also means better handling and traction. Having the correct psi reading on your tires also helps the environment because less fuel is being used.